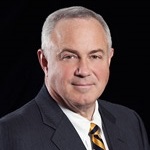 Richard W. Woody, CLU®, ChFC®, CFP® has lived in the Midwest all of his life. Born in Peoria Illinois, at age 14 he and his family moved to Sioux City, Iowa where his father was an Agency Manager for The Equitable Life Assurance Society of the US.

After attending the University of Kansas, Richard moved to Chicago to enter the financial services industry. While working in Chicago, Richard met his future bride Mary, at a Cubs/Cardinals game and they were married in 1988.

Richard & Mary moved to the Kansas City area in 1988 and Richard stayed in the financial services industry. In 1992 Richard joined Northwestern Mutual (NML) with the Dan Ertz Agency. Four years later, Richard was #4 in the nation among over 250 sales manager for NML. In 1997, he was invited to come and work for their home office in Milwaukee Wisconsin to train for 3 to 5 years to become a General Agent. Richard and his family moved to Milwaukee and he worked as an officer in the Agency Department of the company for three and a half years.

In 2000, Richard accepted the position of General Agent in Louisville Kentucky. While spending 5 years in Kentucky, he and his agency set many records for production and recruiting. Richard sold his agency, investment firm and 2 group companies in 2005 and moved back home to Overland Park, KS.

In December of 2006, Richard was asked by Guardian Life to take over as their General Agent for the territory of Kansas, Missouri, Nebraska and part of Iowa. Essentially beginning with 5 representatives for the whole territory, he has grown the agency significantly since assuming the helm for Guardian. With agents and brokers now throughout the territory, Richard’s goal is to grow the agency to well over 100 representatives before he retires in 2024.

Richard and his wife Mary have been married since 1988 and have three terrific children. Meghan, Lauren and Ryan. Meghan is a graduate of Boston College and is applying to Med School. Lauren is a senior at Ohio State and will graduate in December of 2014 with a degree in nutrition. Ryan is a graduate of St. Thomas Aquinas high school and will be attending the University of Kansas in the fall of 2014.

Richard is an avid duck and turkey hunter, he likes to fish and play an occasional game of golf. Richard is also an avid woodworker, crafting fine furniture in his spare time. He is also the Area Chairman for a large Ducks Unlimited Chapter in Kansas City and sits on the Board for the Leukemia and Lymphoma Society.